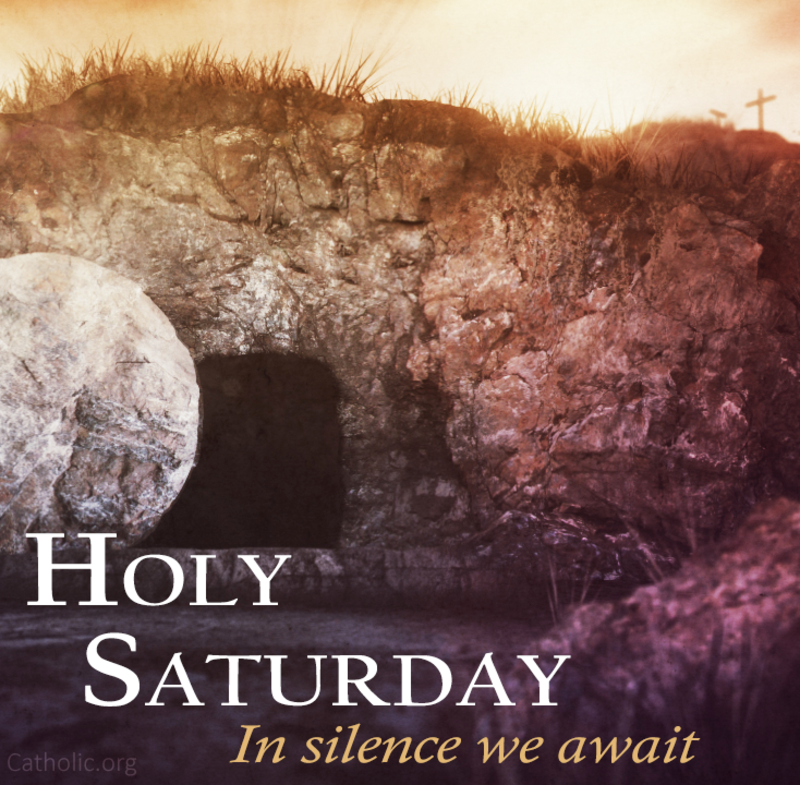 Imagine sitting at the burial site of a loved one. The fragrance from flowers wofts up into your nostrils; the gentle the gentle wind kisses your face and your mind wanders as you consider the nature and meaning of life, and of death, and of what all this means. In scripture, Job asked a timeless searching question: “If a man [or woman] dies, will he [or she] live again?” And as we consider Holy Saturday – the day following Jesus death and burial, we come with many beliefs, with many questions, and with a faith that yearns to grow search into the heart of God.

I believe Holy Saturday to be the most confusing day of all the days recorded in Holy week. It is confusing because the gospel writers are silent today. Saturday was, of course, the Sabbath holy day of the Jewish people. As Penny read, Mark tells the story of Friday’s crucifixion and burial. Joseph of Arimathea finds a way to have Jesus’ body released and his body is wrapped in a linen cloth and buried in the tomb. And then there is silence. Nothing is written of Holy Saturday. In a similar way, Matthew and John do not record any activity occurring on Saturday. The only gospel writer recording an event on Saturday is Luke who writes of the of the disciples’ activity: Rest ~ “On the Sabbath they rested according to the commandment” (Luke 23:56b). Saturday is a direct contrast to the other days which contain so much detail in Mark’s gospel. Yet Saturday is silence, Saturday is rest, and indeed there is much reflection and confusion. This is the time when Jesus found himself somewhere between death and resurrection.

Journeying in time, we can get an idea of what they were thinking. We can look at Jewish tradition and theology, art, hymnody and church creeds. For the people of that time and understanding, Saturday was a day they believed when ‘God’s Great Cleanup’[1] was about to begin. Through their history, generations upon generations – indeed a millennia of Hebrew people had been systematically oppressed, enslaved, and murdered at the hands of the dominant forces who held power. They had been subjected to the oppressive forces of Egypt, of Babylon, of Assyria, and now Rome. The collective historical memory of the Hebrew people was of pain, suffering and oppression – that is why Psalms like “we wept by the rivers of Babylon, when we remembered Zion” spoke so deeply.

Yet they did not give up. They held a belief that God would one day liberate the oppressed and make all things right. It would be a time of ‘God’s Great Cleanup’. It would come about in the divine vindication of the persecuted after their death. Generations upon generations of Jews had been killed at the hands of warring countries. And they held fast to a faith which proclaimed God’s restoration as extending to those who had already been killed. In the Apocrypha section of the Bible, a number of books written just before the time of Jesus which contained hope-filled beliefs for God’s vindication. There was a belief that, one day, God would balance the scales and clean this great oppressive mess up: God would deliver them from the hands of their persecutors; God would bring restoration.

As we view Jesus’ death at the hands of the oppressive forces of Rome, we must understand that Jesus followers saw God as bringing restoration in this event. Jesus’ death, they believed, would be the genesis of God’s Great Cleanup. Jesus’ death would be the beginning of God’s divine vindication that they had been waiting for over the centuries! Those who are familiar with some of the church creeds will recall how the Apostles’ Creed speaks of Jesus’ action on Saturday. The creed speaks of Friday saying: “[Jesus] suffered under Pontius Pilate; was crucified, dead and buried”. It next speaks of Saturday when “[Jesus] descended into hell.” And finally it speaks of Sunday when “The third day he rose again from the dead”. While the gospels were silent about Jesus’ actions on Saturday, the early church came to see Jesus as beginning ‘God’s great cleanup’. What did Jesus do on Saturday? In the early church’s understanding, Jesus descended to hell – while we don’t have time to get too deeply into their understanding of hell, suffice it to say that this was the ‘pre-Dante’s inferno’ understanding of hell. They saw hell as a place of non-existence (not of eternal punishment as Dante and the Catholic church later taught). It was that of non-existence ~ devoid of life. Jesus descended into hell and he brought back with him all the faithful, persecuted Jews who had been martyred over the centuries. This was the understanding at the time of the early church of what Jesus began on Saturday. It was the beginning of ‘God’s Great Cleanup’.

Now, as we fast-forward to 21st Century culture, we must be very careful as we seek to find God’s truth in Jesus’ story. There has been a tremendous shift in terms of the way we now seek truth compared to that of the biblical times. Since the Enlightenment period of the 17th Century, we now identify truth with that which can be factually proven. Indeed, this identification of truth with fact is a central characteristic of modern Western culture. Yet, this was not how the early Jewish Christians understood Saturday, nor was it the way that people of faith understood it for the next 1600 years. Today, we look at Saturday – the day between death and resurrection and we come with our scientific minds and we look for analytical proof that explains the mystery of what was happening. One of the most profound gifts of the gospel in this section, as I explained earlier, is that they are absolutely silent in giving us an answer. Silence…We don’t know what God in Jesus was up to and we need to use our faith to uncover the answer that comes to each of us. What this does is cause us to reflect and to ponder this central question of Jesus life, his death, and what truth is to be found. We, in essence, find ourselves back at the beginning of this reflection where we are – once again - standing at the graveside of a loved one and pondering what it all means. The lack of the gospels detailing Saturday’s activity requires us to find our own sense of truth in what is occurring. We are Pilate asking “what is truth”? We are here seated here…somewhere between death and resurrection.

So, allow me to share a few thoughts of my own about Saturday, as we find ourselves at this graveside – reflecting on what is before us. As I reflect on it, I do not believe that death is the end of our lives, yet I I have no words to fully explain this. I possess no concepts. I feel reduced to silence before this ultimate mystery of life – that even death cannot conquer. But, if I was pressed to answer Job’s timeless searching question – with which we began our conversation: “If a man [or woman] dies, will he [or she] live again?” I would have to answer YES. For that is my conviction. That is what I believe in the depths of my heart. That is what I have experienced in my life.

While there are no words to describe this idea, Jesus understood it as being a ‘communion’ with God. It meant being in touch with something that transcended all of one’s human categories. It meant having one’s eyes opened to see the dimensions of life that are so rarely witnessed. It meant having one’s ears opened to hear the melodies and harmonies that are so rarely heard. As I think of this time between death and resurrection, I think that there is an implicit invitation into life – which, when explored deeply enough, when lived fully enough, when engaged significantly enough - is a way of passing from death into life a new reality of life. We know all too well that it is possible to live and it is also possible to LIVE! In this way, the finite moments slip into being infinite, timeless moments that become divine. I believe that human life, when lived so deeply, so profoundly, so powerfully, so lovingly ~ that God’s living presence can occur again, even after death.

This is the God whom we meet in Jesus of Nazareth - and this was the life of God that was brought to be with us and among us in Jesus. Jesus life was one that would not be bound by human limits. When those whose fear of God’s Kin-dom was so deep and threatened that they sought to snuff it out, they would later discover that all they had done was merely free Jesus’ Way for all eternity. In the time between death and resurrection, Jesus’ life will be freed from the boundaries of the finite and made timeless, eternal and ever-present. In the time between death and resurrection, we stare through that invisible but ever-so-real barrier that separates time from timelessness, that separates the finite from the infinite, that separates the human spirit from the Holy Spirit – and it is at that moment when we see Jesus as a window into the meaning of the timeless – which is God.

There is a very-real danger of our modern day’s insistence on the quantifiable provability of Easter. For to contain this timeless gift inside a literal framework is to doom Easter’s truth to a death of irrelevance. And so, we gather now, as people of faith. With nothing but … faith. We gather among those who have gathered for two millennia – at Saturday’s tomb and rest and wait. We hold our breath and wait to see what God’s answer will be to the powers of death and oppression. Can the tomb – the powers of death and darkness - hold Jesus? Or is there a greater power at work which will have a final triumph? Will the powers of evil have the final judgment? Or is there yet to be a power who will give an ultimate judgment? Today, we find ourselves somewhere between death and resurrection. And our faith ~ the depths of our soul ~ draw us to wait and see. We wait, yet our hearts…our hearts somehow know what lies ahead.