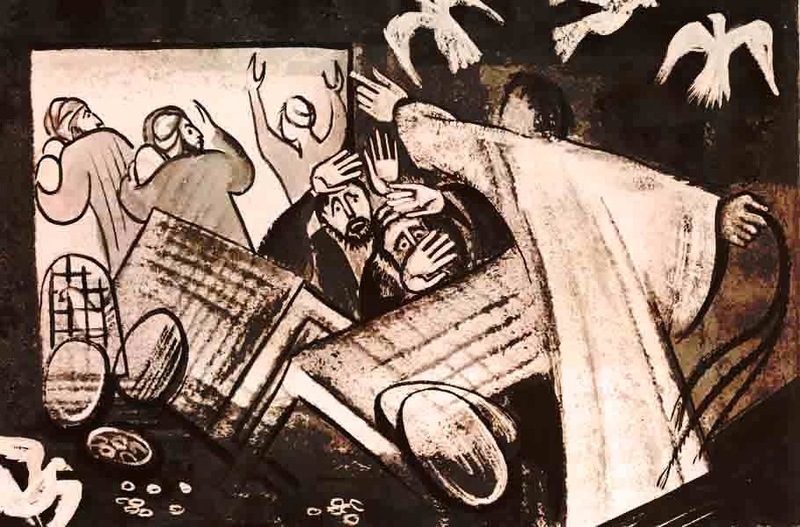 Yesterday (or last week in Northwood United time), Jesus entered the holy city as part of a peasant procession. This, as we explored last week, was done as a counter-procession to the Pilate’s imperial guard also enroute towards Jerusalem, sent to maintain peace and order that Rome had established. Pilate, in his procession, donned armour, carried weapons of death and rode upon a warhorse. Jesus, in his procession rode a virgin colt and carried the spirit of God as his sole protection. Jesus’ entrance to Jerusalem was a deliberate lampoon directed at Rome. It contrasted the institutional power and control of the Kingdom of Rome with the gentle, yet powerful, grace of the Kin-dom of God. What an entrance! Both Pilate and Jesus – two very different entrances/ two very different choices. Quite the first impression.

As we turn the page on our calendar, it is now Monday and we see another powerful entrance by Jesus: his entrance to the temple. It is prudent to stop for a moment and recall the magnificence of this building. The platform extension of the temple was one of Herod’s greatest accomplishments. Huge bricks define this awe-inspiring structure. To date, archeologists have uncovered bricks measuring 40 x 10 x 14 feet in dimension. While yet to be uncovered, Josephus, a historian at the time, wrote that the stones were even bigger: 68 x 9 x 8 feet. The platform was five football fields in length – much of which was reserved as a court for the Gentiles to gather. The Jewish people would also enter this open-air courtyard and pass through on their way to the sanctuary which was reserved for the Jewish people: one section for the males and one for the females. This main courtyard is where Jesus makes his entrance on this Monday in a lush spring day.

To be sure, this was not the gentle Jesus who had walked along the Galilean shoreline and told the disciples to follow; this was not the compassionate Jesus who had stopped at the roadside to heal the broken; this was not the teaching Rabbi who had sat before the crowds ever so patiently teaching. The Jesus who enters is an angry Jesus who comes with fury and force and power. We see a Jesus who drives out the buyers and sellers, who overturns the tables of the money changers, who overturns the seats of the dove sellers, who would not allow anyone to carry anything through the temple. Jesus behaves as a dominant, angry, and physically violent person. What, we wonder, is he so angry about?

In past centuries, this text has supported anti-Semitic notions. Arguing that Jesus was opposing the temple by his actions. Yet, historical analysis has shown the error in this reasoning. Jesus was not opposed to the temple. In fact, the money changers and the animal sellers were absolutely necessary for the temple’s normal functioning. The money changers were needed so that Jewish pilgrims coming for the Passover could pay the temple tax in the approved coinage. The animal sellers were needed so that pilgrims could ensure that they were purchasing creatures that were ritually adequate for sacrifice. What Jesus took issue with was the temple’s corrupt leadership. This, to be sure, was not a new dynamic. It had happened over a long time. Almost five centuries earlier, we heard Jeremiah voice the same concern centuries earlier: “Will you steal, murder, commit adultery, swear falsely, make offerings to Baal, and go after other gods that you have not known, and then come and stand before me in this house, which is called by my name, and say, “We are safe!”—only to go on doing all these abominations? Has this house, which is called by my name, become a den of robbers in your sight? You know, I too am watching, says the LORD”. The corruption had slowly seeped into the priestly families who led the temple. It had become a sanctuary for thieves or as Jeremiah and later Jesus called it had become “a den of robbers”.

As we look back to Sunday’s entrance, we see the same statement being made. Jesus entered Jerusalem, on the day we call Palm Sunday, to bring an alternative to the dominant Kingdom of Rome ~ the Kin-dom of God. Today, on Monday, Jesus had come to oppose the hidden Roman domination masked in the temple’s practices. Jesus has come to oppose the Kingdom of Rome by bringing the Kin-dom of God to Jerusalem.

I wonder what the parallels to Jesus’ tearing apart of the temple in our modern day might be? One of the biggest dangers, in my opinion, is that we become ‘Sunday morning Christians’ and neglect our calling the other 6 ½ days of our week. In his book, “The Other Six Days”, theologian Paul Stevens explores what it means to truly live - each day - as God’s people, who live out their faith. Unpacking the long standing division between clergy and laity, he argues that it has no basis in the New Testament. Stevens notes how, throughout history, the church has been composed of two types of people – those who “do” ministry and those to whom it is “done” for. All work he argues, when it is viewed faithfully, should be understood as ministry. What happens in the Minister’s study is as much ministry as what happens in the office, or at the home, or at the school ~ they all should be understood as significant faith expressions. They are all about the living out of one’s faith in devotion to God. It brings to mind those inspired lyrics from Fred Kaan in the Ron Klusmeier hymn that we just sang “worship and work must be one”. Worship ~ what we do here on Sunday morning, must be lived out, or as the hymn refers to it “work” in our expressions the other 6 ½ days ~ “worship and work must be one!”

My earliest memory of preaching on this text goes back over 20 years to my days in seminary, and it didn’t help my reputation any. A classmate and I decided to stage a dramatization of this reading of Jesus turning over the tables. We found chairs and a table and prepared to re-live Jesus pushing things over. So, as the text was being read, tables were pushed over and a sturdy table was flipped. Unfortunately, the table that I thought was sturdy, shattered into pieces as I flipped it. I received a bill for the table we had borrowed from the student lounge with my next semester fee. This morning’s text reminds us that the image of ‘gentle Jesus’ is not a universal one. There were things which caused his blood to boil; there were situations which he viewed as worthy of dying for. And as this week continues to play itself out, we learn more about that harsh reality of Jesus’ world.