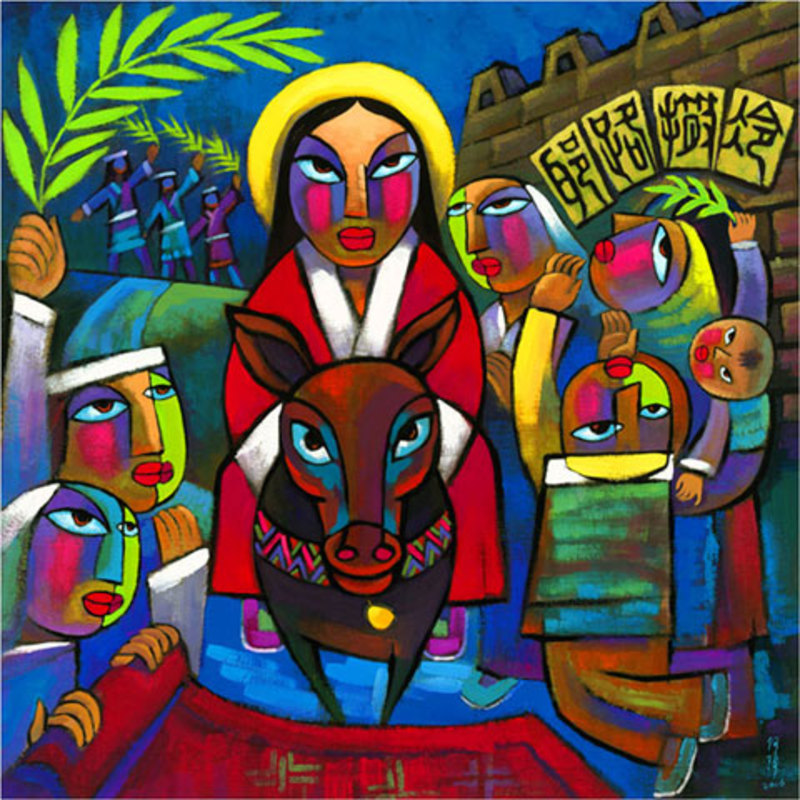 “Jesus’ Last Seven Days: (1 of 7) Which Procession Will You Join”

It was a beautiful spring day in the 30’s. I do not mean the 1930’s, but the original 30’s: all the way back to the days of Jesus ‘30’s: Thirty years into the Common Era: 30 AD, 30 CE or however you define it. And during this lush spring day, the first day after the Jewish Sabbath (when they were not permitted to travel) thousands upon thousands of Jewish people were making their sacred journey to Jerusalem. Jerusalem…Jerusalem…the holy and sacred city for the Jewish people. The place where David had ruled a millennia ago; where his son Solomon had constructed the holy temple of divine proportions. The promised land that the Israelites escaped Egypt for: the land flowing with milk and honey. The land that the Hebrews wept over ~ by the rivers of Babylonian ~ during their time of slavery. To be clear: the land…Jerusalem…was the place of intimate connection with Yahweh, their God. And they were all coming to celebrate the highest Jewish festival of the year: the Passover.

The Passover, of course, was a festival celebrating God’s ‘passing over’ their ancestors in Egypt. It was the time when God’s wrath came down upon their Egyptian captors and ‘passed over’ the Israelites bringing freedom. On that night, all the Israelite homes had smeared blood upon their doorposts, a symbol of sacrifice, and death came upon the Egyptians in the night. In the morning, Pharaoh let the Israelites go. The Passover, in its deepest sense, was a festival of liberation from slavery; it was a call to ‘come home’ to the Promised Land; it was a reminder of a God who would protect and love the Children of Israel into freedom. Subsequently, the Passover was their highest festival of the Jewish year. And so they came by the thousands. They came home to Jerusalem.

One group of peasants travelling to celebrate the Passover consisted of Jesus and his disciples. They travelled southbound about 160 kilometers from the town of Galilee. Galilee, of course, was the place where Jesus had first called the disciples. There fishing on the Sea of Galilee, the first followers left their nets and followed Jesus. Now, they followed Jesus south from this place of their faith genesis, and journeyed towards this most holy place where their faith was conceived (and would soon be transformed forever).

Now, as we consider this peasant procession of Jesus and his friends ~ walking on tired feet, we must also consider another historical procession. So often, we lose sight that there was not just one procession, but rather there were two. The other procession was magnificent and glorious and powerful. This was the Roman imperial procession headed by Governor Pontius Pilate. To assure that peace was maintained in Jerusalem amidst the liberation-inspired Jewish festival of Passover, Rome would always send a procession of military reinforcements to Jerusalem. Indeed, Rome was very strategic and clever and the Empire had not maintained power by accident. Any festival celebrating the Jewish people’s liberation over an earlier empire, like the Egyptians, certainly represented a threat to the present empire. So, while Jesus’ procession to Jerusalem from the north was occurring, so too was Pilate’s procession from the south. In fact, as we consider what was happening on this day, scholars see Jesus’ procession as a ‘counter-procession’ to Pilate’s. Predictably, Pilate’s procession included warhorses, legions of armies outfitted with battle armour. Jesus’ procession was outfitted with simple cloth garments, leather sandals, and were devoid of any weapons. Contrast the description of the Jerusalem entry: Jesus rode a virgin colt; whereas, Pilate rode a warhorse. Pilate chose the armour of swords and battle shields; whereas, Jesus arrived with (what Paul would later describe as) the armour of God. Two processions converged upon on the holy city of Jerusalem: Jesus and his disciples and Pilate and his Roman legion. And following these processions, the world would never be the same.

What is important to consider, I think, is that amidst such profound differences, both processions had the same mandate: to bring peace. Pilate sought to maintain peace under the rule of the Roman Empire. Jesus sought to bring peace through the establishment of the Kindom of God. While their  mandate of peace is the same, their understanding of how it would be realized, was profoundly different. To the Roman Empire, peace occurred through the conquest of foreign lands and their submission to Rome. Under their rule, Rome brought their subjects a general sense of order:  protection from warring neighbours, and the freedom to practice, an albeit limited, dimension of the Jewish faith. To Jesus, however, peace would bring with it a complete change to faith and culture. All of Jesus’ parables, all 48 of them, teach about the coming Kingdom of God; where it is God who rules, not the Emperor. It would be a time when, as Micah puts it, “They shall beat their swords into plowshares, and their spears into pruning hooks. Nation shall not lift up sword against nation, neither shall they learn war any more” (Micah 2:4) They shall all sit under their own vines and under their own fig trees, and no one shall make them afraid” (Micah 4:4). Two processions: the Kindom of God versus the Kingdom of Rome – whose version of peace will it be? Which procession will you join?

And so, we consider the first day of holy week – with the day Christians have come to call “Palm Sunday” with a convergence in ideals – ‘Peace’. How this will look, however, either ushered in by Jesus or by Pilate has yet to be determined as the week plays itself out.

I wonder what the modern day parallels to these divergent processions are for us? Peace is a word that we all like, isn’t it? We seek a peaceful vacation; a peaceful partner; a peaceful drive to work. The thought of world peace warms our hearts. Yet, we find this morning that the journey taken towards achieving peace is as critical as its very arrival. Pilate’s rule resulted in peace, yet at what cost…bloodshed, oppression, pain and suffering. Jesus sought to bring about peace and the costs would be tremendous as well: to Jesus it would be his life, to his followers it would be sacrifice and fear. To be sure, neither path to peace is an easy one to travel.

As we consider the two processions journeying to Jerusalem, we remember that as Christians, we also take a journey. For us, it is not a journey towards Passover, but rather a journey towards our high festival of Easter. As we process towards the sacred festival of Easter, we need to begin considering how we travel this road we share with all creation. Are we journeying on the back of a gentle colt or are we travelling on the back of terrifying warhorse? Do our ways oppress or harm others? Or do they bring life and abundance? Do our ways call for the sacrifice and submission of others? Or do they call for our sacrifice and submission to God? In short, our first question this Lent is: ‘Which procession to the holy festival shall we join?’