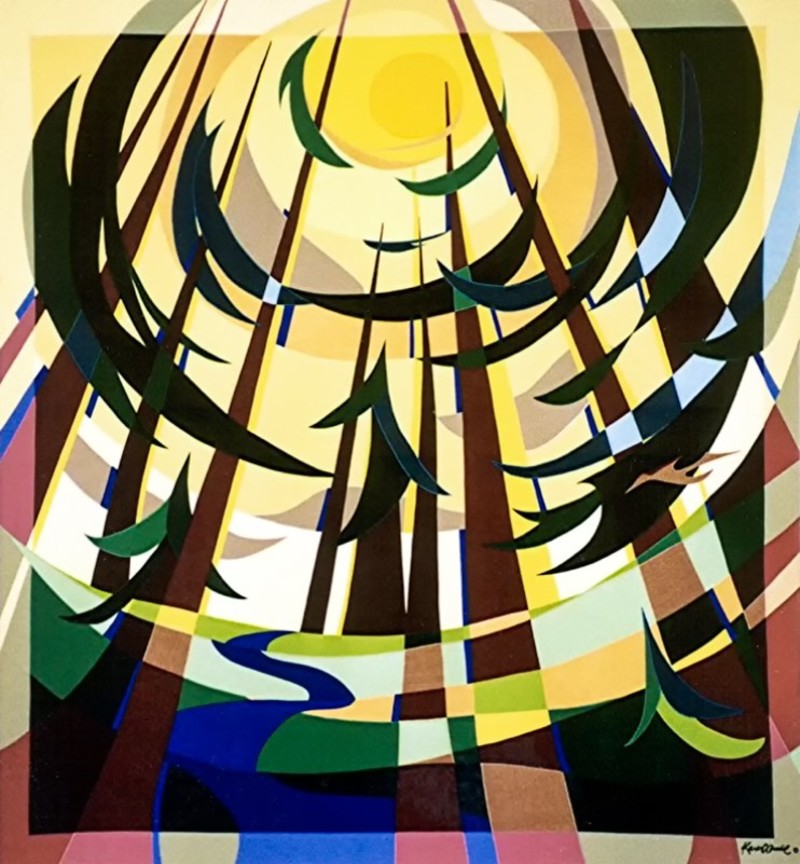 Last Sunday, after participating in an evening service, a friend and fellow Vancouver School of Theology student, Nehemia, and I were catching up together after having not seen each other for a few weeks. After comparing our sermon notes, and discussing where our Pentecost reflections had each taken us (he preached that morning at Vancouver Taiwanese Presbyterian Church), we turned to discussing the trials and tribulations of the upcoming week. We both talked about upcoming travel plans, work, friends, and family; nothing too special or out of the ordinary. As we were nearing the parting hour, and rolling down the hills of New West to get Nehemia to his SkyTrain stop, he asked me, “so, when are you preaching next?” Half groaning, half laughing, I responded “this coming Sunday – Trinity Sunday.” We instantly erupted into laughter, “I hate preaching on Trinity Sunday,” he cackled to me!

I don’t mean to make the wrong impression of either Nehemia or I. We both love the art and practice of preaching the Word with God’s people, and we are both deeply thankful for where we both currently find ourselves. Trinity Sunday, however, poses a challenge to even the most experienced of preachers, as it is a great challenge to attempt to speak about one of the greatest mysteries of Christian faith, the Trinity, without committing some form of heresy or another. Many a well-intentioned pastor has attempted to illustrate the Trinity, and the interwoven nature of the Father, Son, & Holy Spirit. “the Trinity is like a three-leafed clover: three leaves (or persons), interconnected by one stem,” says one pastor as he holds a bunch of clover, while another says “the Trinity is like H2O, existing in three states: ice, liquid & gas,” as she fiddles with glass container full of ice on a Bunsen burner, while yet another, a liberal-arts undergraduate-turned-minister, acts out the persons of the Godhead: “the Trinity is like one person playing three parts in a play,” they say, while reaching for a different mask.

Each of these illustrations, these honest attempts to depict God on human terms, fall flat, and in the process, unintentionally commit different forms of Trinitarian heresy. For other pastors, the appeal to explain or rationalize the Trinity, often leads to presenting a long-winded sermon, full of dense theological terms, phrases, concepts, and jargon, that are better suited to the academy or a Bible study, than to speaking about the communal, and individual, spiritual practices of the people we call church. “What does this all mean?” they vaguely think in their minds, as the preacher turns the seventh page of his sermon, while yet others stare off into the distance while counting the ceiling tiles, or staring at the sanctuary art that hangs so enticingly behind the preachers head. With all of that said, and with all due respect to my fellow colleagues in the ministry, I am going to try to avoid such extremes, and try say a few words about the Trinity.

Perhaps, Nehemia was right, this is the most challenging Sunday to preach each year. As we see revealed to us in the scriptures, we hold fast to the ancient Jewish belief that there is only one God, a belief that was radical in the predominantly polytheistic ancient world, as it is in our current multi-cultural, and religiously pluralistic setting. And yet, we as Christians firmly name both Christ Jesus, and the Holy Spirit, alongside of Abba, the Father and Creator, as being not only God, but the One, and only, God. 1 Deuteronomy 6.4; 1 Timothy 2.5; Ephesians 4.6; etc. We can see this being worked out in the pages of the Bible itself; Jewish monotheism emerges early in the Pentateuch, and the Bible gradually makes it clear that Yahweh is not only one out of many Gods, but is the one and true Lord of the people of Israel, regardless of what other people might think or believe. Even in today’s New Testament reading, we can begin to see the roots of this being worked out: the Father created Wisdom, the Word, or Logos, whom we Christians recognize as made incarnate in Jesus of Nazareth, where the passage from John clearly foretells of God pouring her Holy Spirit upon the people as a guiding, comforting, helping, illuminating, and advocating practice.

Despite this, the word “Trinity” remains curiously absent from the entirety of the Bible. Thus the question remains: how did we end up with the Trinity as so central to our faith, if it remains curiously absent from our scriptures? The church universal, as St. Paul teaches us in both Ephesians, and 2 Corinthians,4 is the bride of Christ, and is instrumental in instruction the children of God on matters of faith and doctrine. “No one,” says St. Cyprian, “can have God for his Father, who does not have the church for his mother.”  With Christ as the head of the church, and with the illumination of the Holy Spirit, and the sustained presence of Abba, the creator, the church is continually being reformed into new faith and understanding. The attempts of early Christians to reconcile their belief in the supreme, singular God of Jewish tradition, with what is witnessed in the pages of the New Testament, (ie: the presence and divinity of both Jesus and the Holy Spirit), was formulated at the council of Nicaea in 325. Nicene Creed (Council of Nicaea, 325) We believe in one God, the Father almighty, maker of heaven and earth, of all things visible and invisible. And in one Lord Jesus Christ, the only Son of God, begotten from the Father before all ages, God from God, Light from Light, true God from true God, begotten, not made; of the same essence as the Father. Through him all things were made. For us and for our salvation he came down from heaven; he became incarnate by the Holy Spirit and the virgin Mary, and was made human. He was crucified for us under Pontius Pilate; he suffered and was buried. The third day he rose again, according to the Scriptures. He ascended to heaven and is seated at the right hand of the Father. He will come again with glory to judge the living and the dead. His kingdom will never end. And we believe in the Holy Spirit, the Lord, the giver of life. He proceeds from the Father and the Son, and with the Father and the Son is worshiped and glorified. He spoke through the prophets. We believe in one holy catholic and apostolic church. We affirm one baptism for the forgiveness of sins. We look forward to the resurrection of the dead, and to life in the world to come. Amen.

Accordingly there is one Father, not three fathers; there is one Son, not three sons; there is one Holy Spirit, not three holy spirits. Nothing in this trinity is before or after, nothing is greater or smaller; in their entirety the three persons are coeternal and coequal with each other. So in everything, as was said earlier, we must worship their trinity in their unity and their unity in their trinity. Anyone then who desires to be saved should think thus about the trinity. (2022-05-22) 12 But it is necessary for eternal salvation that one also believe in the incarnation of our Lord Jesus Christ faithfully. Now this is the true faith: That we believe and confess that our Lord Jesus Christ, God's Son, is both God and human, equally. He is God from the essence of the Father, begotten before time; and he is human from the essence of his mother, born in time; completely God, completely human, with a rational soul and human flesh; equal to the Father as regards divinity, less than the Father as regards humanity. Although he is God and human, yet Christ is not two, but one. He is one, however, not by his divinity being turned into flesh, but by God's taking humanity to himself. He is one, certainly not by the blending of his essence, but by the unity of his person. For just as one human is both rational soul and flesh, so too the one Christ is both God and human. He suffered for our salvation; he descended to hell; he arose from the dead; he ascended to heaven; he is seated at the Father's right hand; from there he will come to judge the living and the dead.

At his coming all people will arise bodily and give an accounting of their own deeds. Those who have done good will enter eternal life, and those who have done evil will enter eternal fire. This is the catholic faith: one cannot be saved without believing it firmly and faithfully. The God we worship exists in perfect unison between diversity and unity, God is as my pastor says, both a singular entity and community, and if we are created in God’s image, then we too carry the marks of the Beloved Community, of which the Rev. Dr. Martin Luther King Jr. spoke, within our own bodies, hearts, souls, and minds. Out of God’s fullness, a fullness of being, and love, and understanding, a way of being that is God’s way, not ours,8 we know that we are loved, and thus we take that love into the world, Trinity Sunday is not about attempting to understand God, to understand our God by committee or creed, so much as it is about beholding that there is a mystery, wonder, and love that lies at the heart of our faith, at the heart of our creator God, that lies deep within our humanity, in the fullness of our expression and diversity, because we were created by love, for love and out of love.