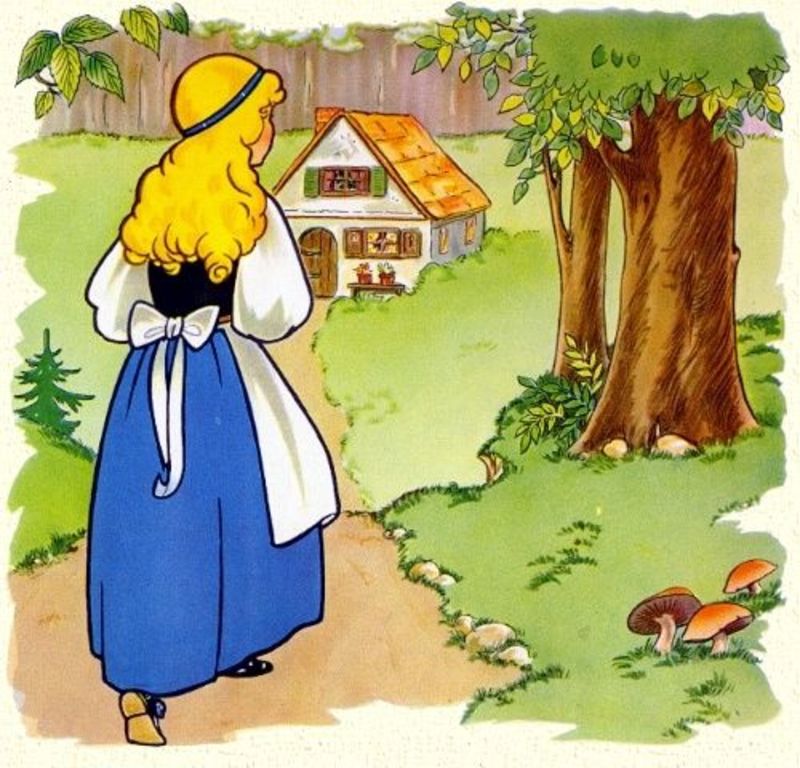 There is a deep fear that, I believe, we all share. A fear that maybe we are born with, that children have, that for us as adults lies deep in our bones and is played out in the darkness of our psyches. It is a fear even written about throughout literature. Goldilocks and the three bears, a well-known story that we remember reading to our children or grandchildren. Do you remember that feeling in the pit of your stomach…when you realized you became lost? That feeling is captured for Goldilocks, when she realized that she was lost? Goldilocks had ventured into the forest on her journey and had become completely lost. She was turned around, all the trees looked the same. And there is that little girl, lost without anywhere to go.

I remember the first time I read that story to my children, wondering, ‘why do we subject our children to such torture?’ You see on your child’s face, the sense of fear and confusion. Compassion for goldilocks and a relentless conviction to never be a ‘goldilocks’ in their own life. It is not just children who are afraid of being lost. This fear is one which comes to rest deep in our psyche. When we are in strange lands, we eventually yearn to return home. We yearn to return home to where things are familiar; home to where we know the landmarks; home to where we can drive seamlessly, without effort. There is nothing like being…home.

There is a spiritual parallel to being lost. In the church, we call this ‘sin’. In its’ simplest of terms, sin is a separation from God. It is when the individual becomes lost. When they have ventured away from all that is familiar – lost from the loving heart of God, lost from their womb of creation, lost from the grace and peace that God offers. Sin is a time when we have become lost ~ lost from the God who created us and who loves us and offers us life in all its abundance.

When we become lost, things happen which we never imagined. Think of Goldilocks, that precious young girl with black patten sandals, a colourful dress, and a woven hat. Apple pie cheeks and a smile that would brighten up the rainiest January day in Surrey. Yet, Goldilocks broke the law. Did we ever imagine her to be capable of such a thing? Of course not…yet she did. She broke into a house ~ that’s breaking and entering. Then she damaged the chair that was too small when she sat on it ~ that’s vandalism. Then she proceeded to steal the porridge ~ that’s theft. So, how much time should Goldilocks serve for her horrible crimes? But seriously, who would have thought that Goldilocks was capable of a B&E, theft and vandalism? It is amazing what people are capable of when they are lost.

David too was lost. We spent time with his story last week. We found that David was overcome by lust, then proceeded to commit adultery and then committed murder. The King of the land, a common criminal. David too was lost. He spied the beautiful Bathsheba from afar, and came to believe that he was above any law or moral code that even God could place on him. With his power as King he essentially rapes Bathsheba (you don’t turn down a King), impregnates her, then covers up the act by having Bathsheba’s husband killed and taking her into his harem as, yet, another wife. David was lost and the great King of Israel was reduced to a common criminal.

Goldilocks craved the comforts of home. She saw a warm inviting home that reminded her of when she was not lost. She craved her home, so she went in. She craved her Mom’s home cooking, so she ate the porridge. She craved her favourite teddy bear, so she slept in the bears’ beds. I believe that when we are lost, our deepest desire is to return home. We become ‘home-sick’. Ill from being lost and our very being can only be cured by returning home.

Goldilocks return home was quite climatic. She was awakened by three bears standing over her, wondering who this little girl was. She jumped out of bed and simply ran home. She ran back the way she came and returned home. David was not confronted by three bears, but was confronted by…God. Nathan was God’s prophet and spoke God’s words to the king.

Goldilocks returned home simply by turning around and going home. She changed direction and returned home. When we distill it down to its purest form, that is the very essence of forgiveness from sin that we understand in the church, isn’t it? Spiritually going home requires the person to change direction. That is the root meaning of confession. David confessed how lost he was. He turned around and looked at himself and he did the most difficult thing possible. He said to Nathan: “God, I have sinned against you!” “I have sinned against the Lord”. For David, there are no excuses, no requests for a quick pardon due to his status as King. There is no bargaining. David simply says, “God, I screwed up’, ‘God I am lost’, ‘God help me’, and in that moment he simply returns…to who he once was…to who he always was…he returns…home.

For Goldilocks, she returns home because she knew the essence of home was … love. I would suggest that David’s confession to God is that same acknowledgement. He knew that unconditional love and acceptance ~ what home should be ~ is the very nature of God. When we return home to God, we are returning home to our womb of creation. We are returning to a God who created us in love; who will unconditionally accept us back. But in order to return home we need to turn to God, we need to change our direction, we need to change our ways, we need to come back home to God.

The other aspect of returning home to God after sin is the restoration of wrongs caused. There is a command to restore things that have been broken as a result of the sin. The parable commands the rich man to restore things to the poor man four fold. The Greek Septuagint version of this calls for a seven-fold restoration. It says “the man deserves to die”. He doesn’t physically die, yet parts of him do die in order for a new way to begin. He does ‘die’ ~ dies to his ways of thievery, dies to his ways of sin. A new man will be born who will restore things and who will work to build a place of justice and community. I was invited to attend a 12 step group with a member of our congregation last month, and some will know that this is the essential part of the 12 step recovery journey. The necessity for the individual to restore the brokenness that they have caused when they were lost. Coming home requires action as well as words.

When you think about your regrets in life, I wonder: what would it take for you return home to God in your areas of brokenness, knowing that a God of love awaits you? Could you begin to restore the brokenness, knowing that God is an active agent helping in this healing and restoration? Could you begin to imagine the profound sense of peace that you might know if you returned home to the heart of God?

As we come to an end of our reflection, there is a story about a wealthy man reading his own obituary one morning. The headline read: “Dynamite King Dies”. As the story goes, the man had been the inventor of dynamite and was described in his life’s summary as being “the merchant of death”. This hoax was not factual, however, as he was very much alive. Albert had amassed a great fortune through the manufacture of dynamite and other weapons. But that morning, he realized that he had never come to grips with the way in which his memory had touched the world. While the truth in the obituary was that factual, it turned out to be prophetic. Reading that obituary was a turning point for the man, it was a moment of conversion for Albert Nobel because from that point on he devoted his efforts towards peace. If we were to write his obituary today, we would likely focus more on peace and less on dynamite because Albert Nobel came to found a prize awarded for humanitarian work in the area of peace ~ better known as “the Nobel Peace Prize”.

We have probably never sold dynamite, but we do have our own life’s regrets that have caused destruction, sadness, and brokenness in our wakes. We take heart knowing that we have a loving God who invites us home, who invites us to use our days to work for restoration and further build a kin-dom of peace and shalom.   Thanks be to God for this good news.