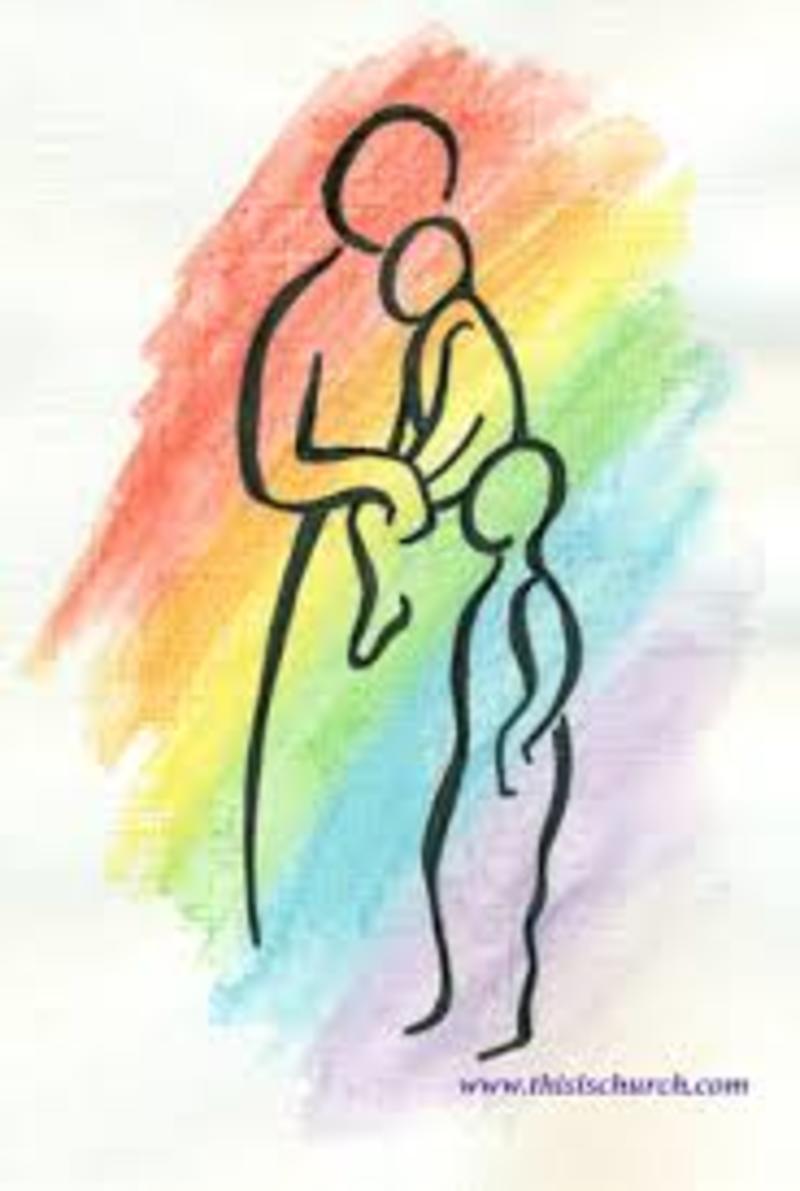 Easter Living: A Journey with the First Letter of John

Do you ever come to church and say “I’m not sure if I believe all that stuff”? Do you ever wonder if what we say, the way we practice, the way we articulate our faith practice is no longer life-giving? It’s OK if you do, I promise not to tell…In fact, it’s good if we do wonder and question and challenge the beliefs and practices of the church because we are people with a 500 year old history of doing exactly that…protesting against the church’s practices. You know that we originate from the Protestant Reformation / the reformers who protested the practice of the Roman church beginning in 1517. So this is deeply ingrained in our bones. And this morning, on Ascension Sunday, I must confess that I have some real concerns over how the church typically conducts the liturgy for this day and I wonder if it might be time to rethink Ascension Sunday.

Ascension Sunday is that day when the church puts the concluding exclamation mark on the 50 day season of Easter. And the church explores one of the three gospel versions of the ascension ~ the raising to the heavens of Jesus Christ. Jesus, having returned after his death and resurrection, having come to reassure his followers of the Easter event one more time, now ‘ascends’ into the heavens in all his glory. If you were to visit Peterborough Cathedral in England (slide), you would find yourself in awe over this beyond-impressive church structure. (imagine if we had to do a roof fundraiser for this building! ~ but I digress) Entering the building, and looking upwards, you would be amazed by the beautifully vaulted ceilings complete with ornamental bosses. Each boss carved with symbols of the Christian faith. You would see, not surprisingly: crosses…and tributes to the various apostles. And, perhaps oddly…you would see the outline of the bottom of two feet ~ you would see in one of the bosses, the soles of two feet ~ depicting the soles of Jesus’ feet as he is departing from earth and ascending into the heavens ~ rocketing skyward as he moves up from earth and into heaven.

Now here’s the problem, at least for me, as I consider my faith. This depiction of a three-tiered universe with God ‘up there’ in the heavens which Jesus is heading towards, and a fiery damnation down below us, and the earthly plane which we exist, is not a true depiction of my spirituality. I know of people who live a modern day ‘hell’ in this plane of existence, and you and I have perhaps experienced that at points our life. In a similar way, I have seen heavenly glimpses on this earth ~ God present around us ~ God within me and within you. There was an interesting finding in the most recent PEW research forum. There was a 9 point rise in people who report finding God in the everyday ~ an increase in just seven years from 40% to now 49% of people finding God in nature, in others, in the here and now. Heaven is here, at times, in our midst and so, sadly, are the feelings and experiences of hell. What I’m trying to get at is that I think our church needs to rethink Ascension Sunday.

The more I think about this, the potential for life and faith on this beautiful Sunday requires less thinking about Jesus’ vertical locomotion towards the heavens and more thinking about something else. A hint to this shift, perhaps might be found in the fact that in the ten verses of the story, only one-half of a verse is devoted to Jesus’ heavenly movement. The other nine and one-half verses are devoted towards much more. What this day is about, more than Jesus’ vertical locomotion and action of leaving, is about God’s divine act of making space so that the mission of the church can now begin. In Douglas Farrow’s thoughtful analysis of the ascension: “Ascension and Ekklesia” (‘Ekklesia’ being the Greek word for church), he argues that so long as God remained in the world represented in human form, all eyes and hearts were fixed there. Jesus’ ascension makes space for the disciples to turn their gaze now fully upon the world where, as the text records: “repentance and forgiveness of sins is to be proclaimed in the Messiah’s name to all the nations”. For me, this is a beautiful way for us to consider the meaning of this day: Jesus’ blessed his followers and left, in order that they could truly be his followers; taking the reins; following the divine initiative to be liberated to be the Body of Christ. Jesus departs making space for his followers ~ you and I to begin to fulfill his ministry throughout the globe. When you think about it, this has always been the way of God. Rowan Williams ~ a wonderful theologian and former Archbishop of Canterbury notes in his book “On Christian Theology” that: “each parts of the Trinity seek not to gain the pride of place or to assert hierarchical dominion over the others, but to give place to the others, so that they too can most fully be what they are”. Jesus’ departure is that selfless act of allowing his followers to be who they have been blessed and called to be: Servants of God; lights of Christ; Blessings to the world

This is a nice place for us to transition over to the Epistle reading. This is the concluding section to this powerful letter that we have examined throughout Eastertide. And the finale to the call to Easter living is around giving one’s testimony ~ living one’s life in a faithful manner according to the teaching of Jesus. Have you ever considered how your life is a testimony to your faith? It is akin to that wonderful challenge that: “your life may be the only Bible others read…so live it well”. Texts like this later gave rise to the doctrine of the incarnation ~ how God’s presence continues to live in and through the body of Christ. Perhaps it was Jesus’ ascension act of leaving that makes space for God’s light to shine through; perhaps it was Jesus’ void in the community that allowed that community to be the body of Christ; perhaps the act of being Easter people further fulfills Jesus’ teaching of the Kin-dom of God.

In Shakespeare’s “Winter’s Tale”, he writes about the challenge of maintaining belief in someone when your are facing the reality of their physical absence. In the play, Leontes, the King of Sicilia, allows his unfounded mistrust and jealousy to fester until they erupt in a rash act – after which his son dies, his daughter is banished, and his wife is seemingly struck dead. Through these cataclysmic events, he realizes the error of his ways, and he must now learn to trust and believe in these family members despite their physical absence. The beautiful part occurs in the play when a wise woman, named Paulina, guides him through the process. She counsels him saying: “It is required you do awake your faith”. The reward is the change that has come over a man who has finally learned how to believe. I wonder if, as we come to the end of Easter, if this Sunday is the call to believe. I wonder, in fact, if Jesus’ ascension is creating the opportunity for us to believe by letting our lives speak. I wonder if this is the season of testimony, as we live as Easter people in the way of the Kin-dom of God as we are so gifted.

As I mentioned at the opening of our service, this Sunday is celebrating ‘Mothering Sunday’. It is a call to lift up those women ~ some biological mothers, and some not ~ but women who faithfully offer their ‘mothering ways’ of gentleness, warmth and compassion. These ways are some of the ways of God. And space has been opened up for women to offer their gifts in their families, their communities, their workplaces, their world. And we give thanks for the ‘mothering ways’ of gentleness, warmth and compassion that are offered by the women in our world. Who do you lift up for giving ‘testimony’ ~ for allowing God’s way to shine through their living? Some of these women have been received home in God’s arms of peace, and other women continue to live their faith day in and day out. And God’s ways continue to be found in the world. Thanks be to God for these women and their expression of faith! These ways of ‘mothering’ do not exclusively originate from the women in our world. The men’s movement has increasingly highlighted the importance of men who faithfully share these dimensions of their lives as well. I so appreciated a comment last year by Prime Minister Trudeau last year speaking in favour of the men’s movement and saying “I am a feminist”. It is the call of men to support the women in their circles who are offering these gifts of ‘mothering’ in the world. And, many men as well, are gifted with components of gentleness, warmth and compassion. It doesn’t make them any less a man. It makes them gifted servants of God who are offering their unique gifts in the world. My daughter had her wisdom teeth out earlier this week. And when we were planning on who would take her ~ her mother or I ~ my daughter chose me. I was shocked. My daughter chose me to go with her, to hold her hand and she waited for the big moment, and to get her safely home and settled. Who are some of the blessed men who are supporting the women in their expression of ‘mothering’? Thanks be to God! Who are some of the blessed men who are offering their unique gifts of ‘mothering’? Thanks be to God!

At the end of the Ascension text, Jesus’ final action is that of blessing them. We conclude every service with that action of blessing, don’t we? It is not an action of my blessing you…it is that tacit reminder of God’s blessing that has been bestowed upon you, that space that has been created for you to now exercise your testimony of faith, and to go forth living as God’s Easter people.

Easter Living: A Journey with the First Letter of John
1 John 3:1-7