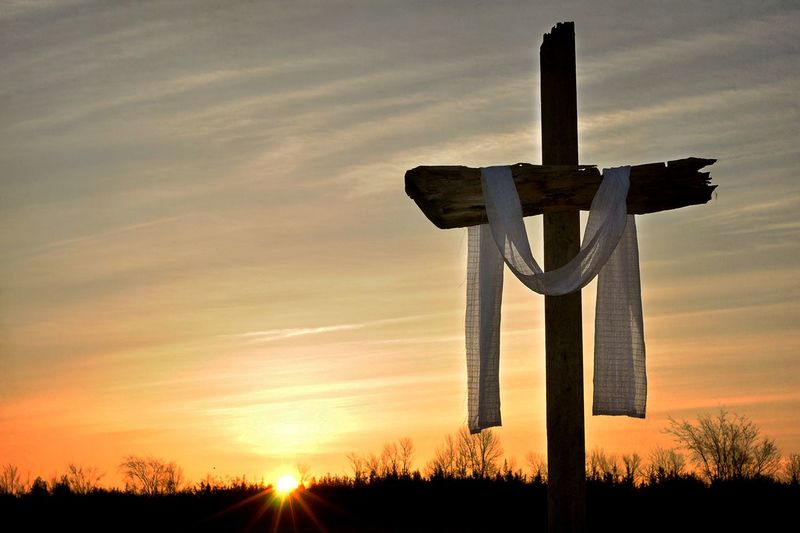 So…did you get fooled yet? You realize that aside from being Easter Sunday, today is also April Fool’s day. There are a long list of Easter pranks going around and perhaps you have been fooled or perhaps you are among the few who are among the wiser. The favourite one I have seen is taking those delicious foil-wrapped chocolate eggs; unwrapping them; and placing a grape inside the foil and re-wrapping them before the Easter-egg hung. Now that is cruel! But, alas, even if you have not yet been fooled, you still have one more hour…so be on guard. These two dates coinciding is quite an event. The last time Easter Sunday fell on April Fool’s day was 62 years ago in 1956: when James Dean was cool, Elvis sang “Heartbreak Hotel”, Rocky Marciano retired undefeated, and Charlton Heston played Moses in the movie, The Ten Commandments. And given that the next time April Fool’s day will fall on Easter Sunday is in 2049, and I will need more than those new rails to climb into the pulpit, I thought we should play with the alignment of these two days, for just a bit as we consider “Easter Surprises”. What I would like to suggest this morning, is that, in fact, Easter is all about surprise; Easter is all about amazement; Easter is all about making the fool out of the most unsuspecting victim.

This lectionary year focusses on the gospel of Mark, so we hear Mark’s account of Easter. And right from the beginning we realize that there is a trick at play. From a literary perspective, Mark’s gospel has a very troubling ending. There is no proper ending. There is no resolution to the story as you find in the other gospels. We heard the story: the women go to the tomb when it is permissible (after the Sabbath had ended), they are greeted by an angelic figure, they are terrified and they run, and nothing is ever said of it again. This is the ending of Mark. The earliest gospel account we have of Easter. Later scribes who would copy this text would seek to finish the story for the reader because they sensed it was unfinished and felt prompted to do so. The few verses that follow ~ what scholars refer to as ‘the second ending of Mark’s gospel ~ include post-resurrection appearances to Mary, then to the eleven, a commissioning to go into the world and tell the good news, and an exaltation of Jesus returning to the heavens. Yet, these are later additions. Our text this morning, the proper ending to Mark’s gospel is unfinished, unresolved, and here we discover the first Easter surprise: it invites US ~ you and I ~ into the story. It invites us to finish the story of how we will be ‘Easter people’.

What I find so fascinating in the Easter story is that it truly mimics the human condition so well. They are all expecting things to be as they always were and, in the end, they meet a profound Easter Surprise. In the Easter story, the expectations of the people was on death as being the end. They expected death to be the end…after everything Jesus had done; after everything Jesus had taught ~ they assumed death was the end ~ even for Jesus. The two Marys and Salome were not, in a million years, expecting the surprise of Easter. They were expecting death. They purchased the spices and they went to the tomb to offer Jesus’ dead body dignity and reverence and love. The practice of the day was to lay a dead body inside the tomb for the better part of a year, in a primary burial spot and where the soft tissue would decay leaving behind only bone. A secondary burial would occur a year later when the bones were placed in a smaller sized ossuary ~ or ‘bone box’. The dignity that these women sought to offer was to place spices over Jesus’ crucified body in order to contain the odour of death and to truly allow Jesus the dignity of a proper burial that had been rushed as the Sabbath was quickly approaching after Friday’s crucifixion. The women’s concerns were on the dignity of a proper burial, and then on how they ever roll the huge stone away in order to gain access. The women had no idea of the Easter surprise that was ahead for them.

I wonder…Do you expect death to be the natural concluding element to living…to all matters of life? If you were brave enough to have mustered up the courage to walk with the women to the tomb on a sunlit Easter morning, would you have gone there walking with the expectation of death as being the end point? It’s OK if you do because that is what we have been taught. It is to a large extent what we have witnessed in the dynamics of the world. We see the powerful dominate the weak and that is the end…it seems; we see the rich trample on the poor and that is the end…it seems; we see the forces of evil overthrowing the forces of good and that is the end…it seems. And it is natural for us to walk with the women and share their beliefs in the ways of the world, in the ways that it will always be, that death will be the end.   Yet in the story, the greatest Easter surprise imaginable occurs. While the first witnesses expected death, they find the Easter surprise of new life that will forever shape their understanding of life and this reality of new life that God was bringing. Their first concern, how they will move the stone away from the entrance, had already been accomplished for them. And as they saw the stone that had been rolled away, they began to realize that everything which they had taken as given was about to change. They were about to receive the original ‘Easter surprise’. It is as if the first Easter was the beginning of April Fools! A young man dressed in a white robe is there; Jesus is not; the women are alarmed. The man tells them “do not be alarmed”. But it is not possible for them to be anything but. This was an Easter surprise of the grandest proportions! Everything that they had taken for granted: the natural outcomes to reality; the nature of how life unfolds; everything was somehow uncertain. The first witnesses were more than just “alarmed” in fact the text goes on to describing them as being taken over by fear, overcome by terror and in a state of amazement. And the story of the first witnesses continued as they lived ~ and was completed with this new reality forever changing their lives.

And for us, who come to this Easter story two millennia later, I wonder how this story of good news will be completed in our hearing, in our living, in our faith? The Easter surprise now becomes revealed to us and completed in our living. The surprising, life-altering reality is now ours in our Easter surprise. The forces of darkness and oppression that Jesus threatened with his Way of justice and peace discovered that while they had killed the man, they had only raised up a movement that would continue on challenging hatred with love; healing brokenness; and birthing the Kin-dom of God’s reign anew into the world ~ the body of Christ ~ the Way of Jesus has risen forever! And the biggest April fool were the powers of hatred, darkness and oppression who God had played the biggest trick of eternity!

Have you seen Easter surprises in your midst? How is it that after a long, dark, cold winter, the buds of spring manage to find themselves onto the trees yet again, that daffodils burst forth, and that signs of life are revealing themselves? That after the darkness and cold of winter, the light and warmth returns and the colours of springtime reveal the Easter surprise of life? Where do you see God’s Easter surprise in your living and in your dying?

How is it that Easter surprises keep showing up when death seems to threaten the end? When I arrived at Northwood, we realized that we had a number of new widows and widowers in the congregation and there was some consideration to how we might extend our care to them. We created a ‘Grief Support Group’ and over a dozen folks gathered together each month to share stories, share the journey, and discover the new life that begins…even after death. That group continues now into its second year as a sign and symbol of new life. Where do you see God’s Easter surprise in your living and in your dying?

We were just locking up the church at night earlier this week after the Board meeting and a gentleman was finding shelter for the evening. I stayed with him, talked with him about his life and his struggles and what help there might be for him. We shared a ‘communion meal’ of granola bars and bottled water, crackers and tuna fish. It really struck me in what he said. He knew that if he came to the church, he knew he would be OK. And he was for the night ~ OK. He was gone in the morning and I pray his journey towards new life might be his path. Where do you see God’s Easter surprise in your living and in your dying?

I don’t think I’ve ever told you this, but my first date with Jaida was on Good Friday. (No I didn’t take her to a church service ~ there might not have been a second one) But our first date was on the evening of Good Friday. We were both single parents who held a deep sadness about how our past lives had unfolded and ended. Yet we also held a yearning for God’s surprise that might birth new life a second chance with joy and peace and hope and love. And as we prepare for our wedding later this year, I can’t imagine a more fitting day to have begun our journey that leads from death to new life. Where do you see God’s Easter surprise in your living and in your dying?

Easter is wonderful with ‘EGGstravaganza’s, chocolate eggs and feasts, yet the true Easter surprise is that God takes what we thought to be dead and impossible and from that starting point God creates life again. May we all be touched with the new life that God offers in those places which are dead and dying, which need nurturing and growth. May the Easter surprise embrace us, as it did the women, and may the Easter surprise be fulfilled in your living and your dying.