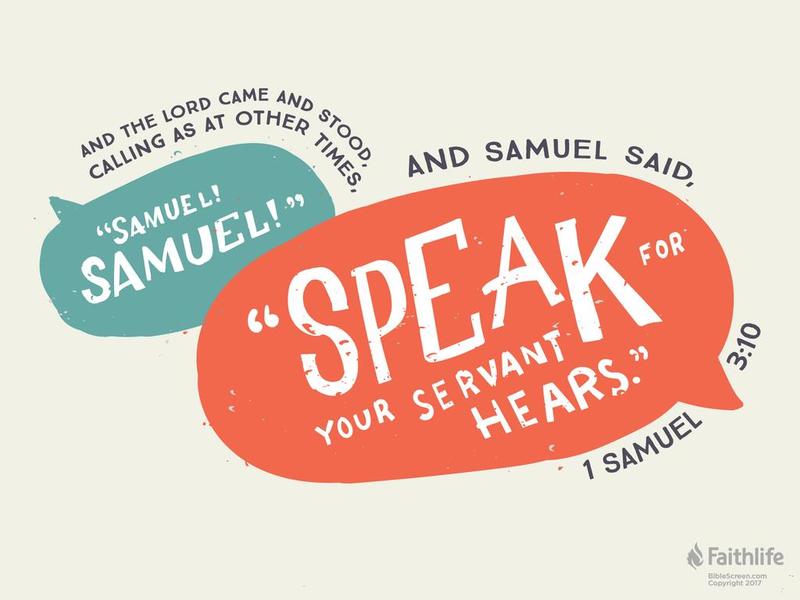 Corrupt politicians, corrupt public officials, corrupt religious representatives…corrupt! Corrupt! corrupt! And I’m not even speaking about modern times! If ever someone tells you that the Bible doesn’t have anything relevant or timely to say, is filled with old and irrelevant stories, invite them to open up this morning’s text and have a second look. This morning’s text would present equally well on Fox news or occupy the front page of those trashy magazines that catch our eye at the supermarket checkout stand. Eli’s sons had been using their status as priests to satisfy their own primal and selfish desires: they had been consuming the precious fat of the sacrifices given at the temple; they had been having sexual relations with the vulnerable women who had come to worship. They had been using their priestly roles for their own benefit and had no reverence for the office which they held. And Eli, their father, had ignored it all, looked the other way with this all unfolding.

As the text opens “the word of the Lord was rare in those days” we find ourselves in an interesting time in the history of the Hebrew people. Historically, this was the time just prior to the beginning of the kingship over Judah and Israel. At the time, people had grown very weary of the occasional service of the Judges who had rescued them when their disobedience had caused them to fall prey to their enemies. And the people longed for a king ~ full of God’s wisdom, full of God’s justice, full of God’s grace. This was a time of literal and figurative blindness. Symbolically we see this in Eli. His eyesight was dimming. The text puts it: “Eli’s eyesight had begun to grow dim so that he could not see”. Does this sound like history repeating itself? Is our world filled with corruption? Do we long for the ‘good old days’? The great leaders of the past? The great teachers? Preachers? Politicians of the days gone by? Where is the hope for our future, we ponder? Well…perhaps some time examining this text will be time well spent because I suspect we can relate on a variety of the dimensions to this text: There may be some among us who, like Eli, have made mistakes and wonder how to move ahead in the right path. There may be those who, like Samuel, are hearing voices of call and wonder how to make sense of these voices. And finally, there are others who are afraid for the future and yearn for God’s guidance.

As we consider Eli, it is so easy for us to pass judgement on him, because he ~ by all accounts ~ was a bad father, a poor leader of the faith, and an all-around poor role model. Yet, isn’t it wonderful that he is in scripture because we have all made mistakes in our living ~ as father or mother, neighbor or citizen; you name it. We have all made mistakes in our faith ~ and find ourselves standing in need of forgiveness and correction. And perhaps we have all been ~ at times ~ poor role models, wishing we could change the past. The gift of Eli’s inclusion in the story of Samuel’s calling is that God uses ALL people, broken and whole ~ loved and hurt ~ tall and small. In fact, we learn that God even uses Eli. The Christian narrative would be incomplete, in my view, if we only had call stories of perfect and righteous prophets like Isaiah ~ who faithfully received the hot coals upon his lips, or Jeremiah who humbly protested that he was ‘only a boy’, or Ezekiel who dramatically saw the heavenly chariot descending from the sky.

Eli’s story is that of a man’s real, human struggle. It is an assurance that, while life is lived in various shades of gray, and gets profoundly difficult and confusing when actually lived out, God will not give up on us. I love how the text describes Eli’s spiritual vision as not yet fully gone. After describing Eli as one “whose eyesight had begun to grow dim so that he could not see”, it continues saying that “the lamp of God had not yet gone out”. There was still a glimmer of hope ~ as dim as those days were. There was still possibility ~ for the light had not yet gone out. Sometimes, even when we least expect it, God will speak ~ God’s light will shine ~ in the most unexpected of places. To be sure, it would not have been easy for Eli to have received God’s light / God’s voice speaking, for her knew there would be a reckoning. It would, in some ways, have been much easier to stay ‘in the dark’ for ~ he knew that he would need to make things right with God. Yet, Eli also knew that God was a God of mercy. Eli wanted to make things right from the past. Eli, knowing that Samuel had spoken to God, inquired as to what God had said saying to Samuel: “What was it that God told you? Do not hide it from me. May God do so to you and more also, if you hide anything from me of all that God told you”. That was a beautiful moment of truth and hope and a new beginning for Eli. A chance to finally ‘come clean’ and begin anew with God. Do you see some of your story in Eli’s? The gift, as I see it, is in a God who will provide opportunities for us to ‘come clean’ of our past mistakes. The gift is in a God who yearns to have relationship with us ~ to open our eyes that we might see the grace and the glory around us. And even after things have really messed up, for us to find a way home. The gift is in a God who acts with us / through us / and sometimes even ‘in spite of us’ ~ a God who seeks to use our gifts and talents in allowing the Kin-dom to unfold in the world. Do you see some of your story in Eli’s? I know I do.

This story, of course, is primarily built around the calling of Samuel which occurs against the story of Eli. Samuel’s call occurs in the ‘varying shades of gray’ world that he, and we, are forced to live in. He is called once, a second time, and still a third. “Samuel…Samuel…Samuel”. His immediate reaction is to go to Eli. It must have been his master who is calling, he thinks. So Samuel faithfully goes to the bidding of his master to inquire what his master requires. This is a time when, as the text puts it, “Samuel did not yet know the Lord, and the word of the Lord had not yet been revealed to him”. When Samuel first hears God’s call, he doesn’t know how to interpret it. Eli sends him back to sleep ~ ‘I didn’t call you, go back to sleep’. I sometimes worry how dulled our hearts, minds and souls have become over time, that we have drawn deaf to God’s call. Are we blind to God’s presence? ~ deaf to God’s call?

In our mindfulness meditation group on Tuesday nights, our goal is to become more fully present / more fully alive to all that is around us. One author I read to the group from is Thich Nhat Hanh who in his book “The Miracle of Mindfulness” writes “many people are alive, but don’t touch the miracle of being alive”. After approaching him about his call, Eli sends Samuel back to bed ~ we squash our children’s imagination by hurrying them along ~ we move about our day lives at such a rapid-fire pace that we miss so much, the danger is that we miss God’s presence ~ God’s call ~ God’s light ~ we miss life! I recall speaking with a recently retired minister who told me “I never knew how tired I was until I retired”. Have we become so busy and overprogrammed that we have come to ignore God’s call? Can we sense God speaking each day of our lives? Guiding us…calling us…yearning for us to be ‘Good News’ prophets in the world? The good news in the story is found in God calling Samuel not once ~ “Samuel! Samuel!” not twice “Samuel!” but a third time “Samuel! Samuel!” God will not give up on calling God’s people because God loves us; God loves Creation; and God yearns for, as we pray, ‘thy Kin-dom come’. This relentless God who calls us over and over and over, eventually convinced both Eli and Samuel the origin of where the voice was coming. The good news is that God will keep calling until God is heard!

Last Sunday, I shared my love of the Benedictine monastery where I take retreat time each year. And don’t worry, I won’t splash you with baptismal water again. But, what I would like to do is read a piece from the prologue of the “Rule of St. Benedict”. St. Benedict’s words speak 1500 years later to us this morning: “Listen carefully, my child, to my instructions, and attend to them with the ear of your heart. This is advice of one who loves you; welcome it and faithfully put it into practice. The labor of obedience will bring you back to God from whom you had drifted through the sloth of disobedience. This message of mine is for you, then, if you are ready to give up your own will, once and for all, and armed with the strong and noble weapons of obedience to do battle for Jesus, the Christ”.