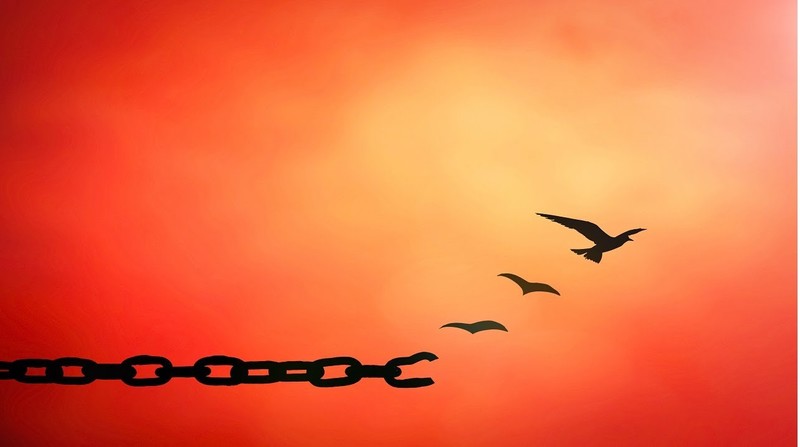 What is the Nature of God’s Forgiveness?” 2/2

What are you chained to in your life? What drags you down? What is holding you back from living in freedom and liberation? In Greek mythology, you might recall the myth of the beautiful princess Andromeda who was chained to a rock awaiting her imposing death, as she was being sacrificed to a horrible sea monster. Epic myths like this one led to modern day fairy tales of princesses being rescued from dragons. In this myth, Andromeda’s mother, Queen Cassiopea had boasted that her daughter was more beautiful than the daughters of the sea god Nereus. To punish the queen for her arrogance, Poseidon sent a horrible sea monster to ravage the coastline where Queen Cassiopea lived. King Cepheus was desperate as he sought to avoid this catastrophe. After consulting the oracle, he found the only way to avoid this disaster was to sacrifice his daughter Andromeda to the approaching sea monster. And so, the king made the horrible decision. Andromeda was stripped naked and chained to a rock. Princess Andromeda stood there naked, chained to the rock, unable to move. Have you ever felt stripped of your dignity? Chained to difficult parts of your past? Unable to escape?

And so, we move to the first text for today, Colossians 13. For the early Christian community, Paul is presenting a call towards living the new life of the Christian Way. He encouraged them not to be chained to the ways of this world, but rather to: “seek the things that are above”, “set your minds on things that are above”. While much of the philosophy of Paul’s day encouraged physical gratification / “gratification of the flesh” as he often puts it, Paul sought to shift people’s dependence away from the material ream into one of being blessed by that of the heavenly. He wanted the early believers to understand that their links to the heavenly realm as ones that could be established in the here and now; that they could, in fact, gain some experiences of the heavenly realm now. He calls them out on being enslaved to the ways that lead to death and destruction. As Paul loves to give lists in groups, he offers three lists of five here. Put to death that which is chaining you / enslaving you to all that is earthly he advises. Paul lists the first group of five vices: “fornication, impurity, passion, evil desire, and greed”. He continues giving another list of five which further enslave us to the ways of evil and death: “anger, wrath, malice, slander, and abusive language”. And as we think these items through, these are generally the areas that take us astray, aren’t they? They are the areas of sin, the places that cause broken relationships with others, brokenness in the world. These are the places that enslave us to the pain and suffering that we cause / and experience in the world.

For Paul, he encourages his community to replace these old ways of being and replace them with a new way of living. For Paul, it is almost like putting on a new set of clothing. He encourages them to ‘put on’ a list of five virtues: “compassion, kindness, humility, meekness, and patience”. For Paul, it is a call to become connected to an entirely different form of living. As he begins with the call to “set our minds on things that are above”, “to seek things that are above”, this is the way in which he sees us as exercising it. To no longer be enslaved to these old ways of being / to no longer be enslaved to these vices / but rather to now be attached to the heavenly realm – to be clothed in the ways of Christ, as choose the clothing of “compassion, kindness, humility, meekness and patience”. In case we didn’t already get the allusion to one’s baptism, where we consider how we both figuratively and practically ‘put on Christ’, Paul proceeds to use the baptismal formula popular at the time saying “in that renewal there is no longer Greek and Jew, circumcised and uncircumcised, barbarian, Scythian, slave and free; but Christ is all and in all”. Paul is offering a way of turning away from being the chains of enslavement and being liberated to the heavenly realm, the glory of God.

I’m feeling a little bad for leaving you hanging with the Greek myth of Princess Andromeda. We left her a few moments ago chained to that rock with the sea monster approaching. Well, as we know, the story does not end there. And, I suspect you have read a few princess and dragon tales in your day. For Princess Andromeda someone came to save her. Perseus was returning from his battle where he sleighed Medusa. As the story proceeds, Perseus kills the sea monster, frees Princess Andromeda from her chains, and marries her. Andromeda was not enslaved to a way of impending death, but rather she was liberated from her chains, clothed and freed. We too have been liberated from our chains in this life through the way of Jesus Christ. We do not need to be enslaved to the ways of death, suffering and pain. As Paul taught, Jesus’ way of “compassion, kindness, humility, meekness and patience” offer us a way to be connected with God. As the text concludes, the key to breaking the chains is forgiveness. Paul begs them “bear with one another, if anyone has a complaint against another, forgive each other; just as the Lord has forgiven you, so you also must forgive”. Paul knows that forgiveness is the key to this new community finding strength and resilience; forgiveness is the key to them growing; forgiveness is the key to them ‘putting on Christ’ and connecting with God. As much as forgiveness is a characteristic of God, forgiveness is also a characteristic of God’s community.

We essentially have two choices when it comes to forgiveness: to practice forgiveness or not. According to an article published by the Mayo Clinic, if we don’t practice forgiveness, we are often the one who pays the most dearly. If we remain chained to the ways of anger, resentment and bitterness, these will enter into every future relationship and experience. The article outlines the casualties of being chained to the ways of destruction. We become so enwrapped in the wrong that we cannot enjoy the present. We become anxious, depressed and often feel that our life lacks meaning and purpose. Remaining chained to such emotions is costly, painful and potentially deadly. Yet, if we chose to link our lives to the way of forgiveness, we can embrace greater experiences of peace, hope, gratitude and joy. The article cited the path of forgiveness as leading to healthier relationships, lowered levels of stress, anxiety, and hostility. It noted physical benefits such as lowered blood pressure, improved heart health, higher levels of self-esteem and diminished reports of depression. As I have mentioned before, I have deep respect and admiration for people who transform their lives through the 12 steps, as they recover from an addiction. I have had some very powerful conversation with people as they have navigated the 8th step. In this step, they make a summary of all the persons whom they have harmed and seek forgiveness. It is a time of both forgiving oneself and seeking forgiveness from others whom one’s addiction has harmed. It is actively seeking and rebuilding a community of peace and wholeness. It is as Paul spoke about, of “setting one’s mind on things that are above”.

This is probably a good transition time to move to the brief two verse gospel lection. In those two verses, we gain an essence of what it means to practice forgiveness. When Martin Luther King Jr. wrote: “Forgiveness is not an occasional act, it is a constant attitude”, I suspect he was thinking of this brief section in Matthew. Let’s be honest, forgiving once is tough. But to do it twice, or a third time…that’s profoundly challenging. And it is an even taller order that we are being tasked with this morning! Jesus is not calling us to forgive a few times. Well how many times then? Seventy seven times! Most scholars link this teaching back to the Genesis story (4:24) when Lamech proudly boasts to his wives that he will avenge anyone who dares attack him 70 7 fold. Yet, in this case, forgiveness is being presented as the antonym to revenge. It is not about, as Lamech thought, how well we can get back on our enemies who attacked us. It is about how we can forgive them and produce peace and wholeness. It is not about biding our time and waiting for a future date when we can lash back ~ I forgave them three times, they had their chance, now I give it to them with both barrels ~ vengeance will be mine! 77 times forgiveness is more of a way of being. It is about forgiving so many times that we lose track. It is when forgiveness, rather than retaliation, becomes our nature that true peace and wholeness in our lives and our relationships becomes possible. While this might seem an impossible goal for our living, it is helpful to remember that this teaching forms an introduction to the well-known parable of the forgiving master and the unforgiving servant. To be sure, this is not a ‘go and do likewise’ parable. This is a ‘this is what the kingdom of God is like’ parable. And as we increasingly make moves towards a 77 times forgiveness way of living, that kingdom of God becomes further realized in our living and in our being.

We are all presented with challenges in forgiving. This is one of mine. I once had a horrible experience with a person in a former congregation I served. I remember driving home after publically being treated so horribly, feeling very angry, wondering how I would find the strength to serve as this person’s minister in the days ahead. When I came to work the following day, one of the elders of the congregation who had witnessed the incident came to visit me in my study. A wise man, and a man of few words, and in this case, there no words…only numbers. A piece of paper with two: “77”. He said “Rev. Scott this is the cost of being a Christian, but the reward is always worth it”. That piece of paper remains very important to me; it was important to me in the days ahead as I sought to practice forgiveness; it was important on the day I presided at his funeral; and those numbers “77” will always be important in our lives. They are important because they invite us into a lifestyle of freedom, not being enslaved to the wrongs of the past, but rather choosing to irrevocably be connected with the God of life who forgives us time after time. Who calls us to choose life, to choose freedom, to receive the gift of forgiveness and to offer back into the world.

Thanks be to God. For God’s freedom that we know through forgiveness. May we choose the ways of life and liberation.