What is Truth...Experiencing our Faith Story 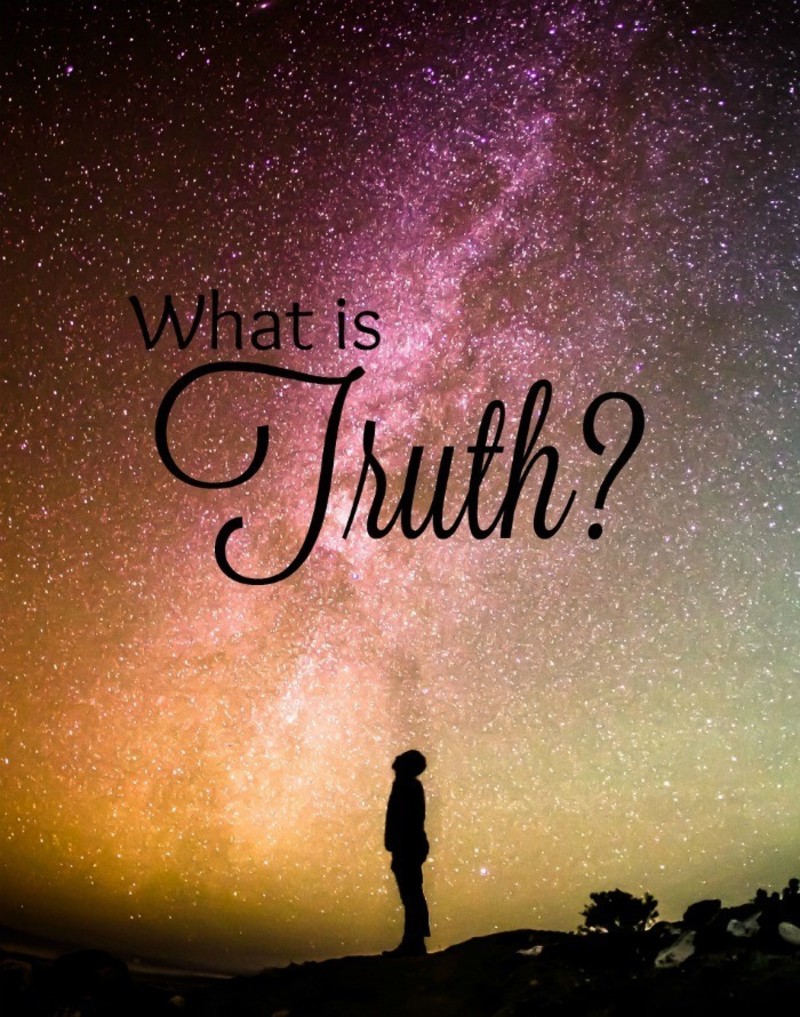 What is Truth?: Experiencing our Faith Story”

I would like to begin with an ancient wisdom story that dates back to the time of Christ. A long time ago in the valley of the Brahmaputra River in India there lived six blind men. They would compete with each other to see who could tell the tallest story. One day, however, they fell to arguing. The object of their dispute was an elephant. (screen) Now, since each was blind, none had ever seen that mighty beast of whom so many tales are told. So, to satisfy their minds and settle the dispute, they decided to go and seek out an elephant. They hired a young guide and set out early one morning, moving in single file along the forest track, with each placing his hands on the back of the man in front. It was not long before the guide led them to a forest clearing where a huge bull elephant was standing. The six blind men became quite excited; at last they would satisfy their minds and know what an elephant is. One by one, in turn, each of the men took their turn to discover the elephant. The first man announced: “O my brothers it is as sure as I am wise that this elephant is like a great mud wall baked hard in the sun.” “Now, my brothers,” the second man exclaimed “I can tell you what shape this elephant is – he is exactly like a spear.” The third man countered: “Why, dear brothers, do you not see this elephant is very much like a rope.” “Ha, you are all wrong, this elephant much resembles a serpent.” The fifth chimed in: “Good gracious, brothers even a blind man can see what shape the elephant resembles most. Why he’s mightily like a fan.” At last, it was the turn of the sixth man who proclaimed, “This sturdy pillar, brothers, feels exactly like the trunk of a great palm tree.” Of course, no one believed him. Their curiosity satisfied, they all linked hands and followed the guide back to the village. Once there, seated beneath a waving palm, the six blind men began disputing loud and long. Each now had his own opinion, firmly based on his own experience, of what an elephant is really like. For after all, each had felt the elephant for himself and knew that he was right! And so indeed he was. For depending on how the elephant is seen, each blind man was partly right, though all were also entirely…wrong. (screen)

Most, I suspect will have heard some version of this story. And the reason I wanted us to begin our journey in this way is for us to begin by acknowledging the contextual challenges of the task before us. Before we start trying to unpack our own response to where God is amidst suffering and pain, or forgiveness, or heaven and hell, or interfaith dialogue, we must first consider a useful approach for uncovering God’s Word for our lives today. As we know, it is not as simple as reading a verse of scripture and applying it to one’s life. In the United Church, we take the Bible very seriously, but we do not take it literally. But what does that mean? Perhaps we should begin with our roots. On October 29th, we will celebrate our Protestant Reformation roots, which this year will be the 500th anniversary of Martin Luther nailing his 95 theses to the Wittenberg church door on October 31, 1517. As we consider our roots as a church coming out of the catholic church, we will be focusing on our view of scripture as a gift of God that can be heard – by the people, interacted with – by the people, and indeed understood by each and every person in the pew. Liturgy ~ worship ~ became known, not as the work of the priest, but rather as ‘the work of the people’ and ALL people ~ lay and clergy ~ participated in making worship to be rich and deep and full of meaning.

Thus, we are a church that requires deep spiritual work to be performed by each person. We ask more questions than we give answers, and we, in fact, require people to come to their own conclusions and answers about God’s call, God’s love, and God’s place in their lives. And even before that great Reformation was happening, we might even consider how the first 1500 years were rich in people of faith who began this work ~ the Great church fathers like Aquinas or Augustine; or the early monastics like John Chrysostom and Amma Sarah of the Desert; and mystics such as Francis of Assissi and Hildegaard of Bingen. In their own ways, the early forefathers and foremothers of our faith began by offering interpretation of scripture and adaptive possibilities for our living.

I chose for us to begin our Fall Reflection Series “Welcoming Doubt…Building Faith” by opening with Jesus’ interaction with Pilate and Pilate’s existential question ‘what is truth?’ We normally consider this text within the setting of Holy Week and look at it from the perspective of Jesus being condemned to death. This morning, we consider it from the perspective of one seeking truth ~ ‘what is truth?’ Jesus comes to the world, comes to Jerusalem, comes to Pilate’s chambers representing a very different truth than the Roman truth Pilate represents. It becomes a clashing of two kingdoms ~ the Kingdom of Rome and the Kin-dom of God. Jesus counters Pilate’s questions: “my kingdom is not from this world. If my kingdom were from this world, my followers would be fighting to keep me from being handed over to the Jews. But as it is my kingdom is not from here”. Pilate becomes curious, fascinated, perplexed with Jesus. He is drawn to Jesus… Is HE a king? Who is this Jesus? Jesus says: “everyone who belongs to the truth listens to my voice”. Pilate is thoroughly confused…he turns to Jesus, as the one with authority asking … “what is truth?” Truth is something which must be pursued. Truth is something which we come to within our faith; it is something we come to Jesus with in our own faith journey; it is something we ask in our walk of faith when we say ‘what is truth?’

But how do we distill truth in our living? How DO we take the Bible seriously, but not literally? One of the most helpful ways to begin our investigation, I think, is to use a method for theological reflection that comes from one of the founding denominational roots of our United Church of Canada – Methodism. In the late 18th Century, John Wesley developed a method, that was later coined “The Wesleyan Quadrilateral” by American Methodist scholar Albert Outler. (screen). In this approach, Wesley places scripture, the Word of God, as the first authority and understands that scripture contains the only measure whereby all other truth is tested. In the diagram, it is the foundation of all the other parts of our reflective process. But, scripture is not all there is to attaining truth. Remember, we take the Bible seriously, but not literally. Tradition is also a piece of our reflective consideration. Wesley also wanted to lift up the wisdom of 1,700 years of historical understanding of the faith ~ for us we now have an unbroken chain of 2,000 years of faithful men and women who have studied and interpreted scripture. This is the wisdom of the Saints that has been passed on for our understanding and growth. Aside from the passing down of the tradition of faith over the past two millennia, we also have this wonderful gift of our reason. Wesley clearly states that we cannot understand the essential truths of scripture without our reason. As he unpacks reason, he views it as being assisted by the work of the Holy Spirit. Our reason is a gift of God that helps us deeply commune with God. Lastly, the one which I think we most easily discount in the liberal traditions in the church is that of experience. Wesley proposed that we cannot have assurance of something, a deep and authentic connection with God, unless we have experienced it for ourselves. This is the living of our faith, experiencing it in ‘the other’ and seeing miracles and healing in our midst. Aside from scripture, Wesley viewed one’s personal experience as being the strongest proof of Christianity. Faith is a living, breathing reality. It is one to be lived and experienced. It is that experience of once being blind, but now…I see (screen).

Over the coming weeks, we will be exploring some of the various threads that people reported as being their personal deep faith doubts and wonderings in our service last April when we spent some time with ‘doubting’ Thomas. As our worship committee met last spring to plan into the fall, it seemed that there was a lot of honesty and authenticity in people’s questions being asked. You won’t be given answers, but hopefully we will find ourselves a little further along the faith journey that we walk together. Two faith considerations, which continue to top the list, will be given two Sundays each. We will consider the subject of theodicy ~ where God is amidst the pain and suffering in the world. After that, we will spend a few weeks on the nature of forgiveness ~ God’s and ours and how it all intertwines. Other topics explored will be ‘the beyond: heaven, hell and life after death’, the nature of where our world is going, and lastly considerations if there is a place for interfaith harmony amidst the Christian faith.